Another Dominion treasure discovery in July of 2015!

"Hi Dave,
Yes, thanks for your note and the location of the photo.  I googled 'tugboat Dominion' and found the website OK.  Great to see my old wheel again.  Thanks for the kind words!  This was probably the nicest ships wheel I ever made, from about twenty or so big wheels I have made as a sideline all my adult life.

It was inspired by the 18th Century style double-rim wheel on HMS Bounty in St. Petersburg, Florida, now sadly sunk.  I saw and photographed that wheel on my honeymoon in 1979.  Your wheel is only double rim one I ever made.  I learned to make wheels as a boy from my Grandfather.  We were a family foundry and machine works on the Gulf Coast near Galveston, and specialized in ships' steering systems, marine steam engines, etc.  My Grandfather had trouble after the war buying decent high-quality ships wheels for our ships' steering engine customers, so we set up to make them ourselves with our own woodworking and foundry pattern shop.  We already had lots of mahogany and walnut on hand because that was the wood we used for foundry patterns.

The company, originally with quite a few employees at its height when I was a kid, was a casualty of the Oil Slump down South in the late Seventies, early Eighties, and I came up here to the PacNW in 1984/5 to make a new start with the smaller machines and what was left of the family business.  I kept it small from then on, just me, and no employees. 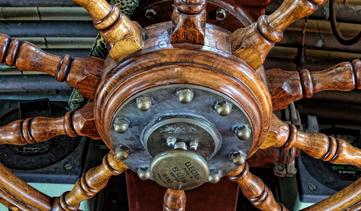 I have some very old machine tools that I bought or inherited, and one small English engine lathe I found in Seattle is one of the oldest I have ever seen in this country, and made in the 1830's.  The maker is listed in London business lists from that era and died in 1838.  The spokes in your wheel were turned in that lathe.

They were completely hand turned freehand, and each spoke is very slightly different if you look close!  The rims are the hardest part of a wheel, as even a very tiny mistake in measuring will multiply thru all the pieces around the circumference and leave a big gap.  You have to work fairly close, to a 64th of an inch or so, but of course that is like all thumbs to a machinist used to thousandths of an inch!  The 'gotcha' is the wood itself; it can expand or contract with being cut or not seasoned enough.  It has to be very stable wood and seasoned for a few years after it is cut roughly to size.

I started making wheels up here as a sideline when work was slow, to make ends meet as we were getting started up here.  A really nice ships wheel will always sell, so it was a good way to pay the bills as we developed a customer base up here for the new smaller machine shop and foundry.  One of my wheels I sold North of the border in the early 1990's caught the attention of a chap who was with a TV station in Vancouver and they sent a crew down down and filmed a half-hour TV special about my wheel making.  I still work full time, at age 62 (2015) and unfortunately now have little spare time for making wheels!  I made my last two wooden wheels for the NOAA ships Miller Freeman and John Cobb back in the early 1990's.

I also cast the replacement bronze builders plaque for the Cobb as her original had been stolen.  I heard where my replacement has now been stolen as well!  The Miller Freeman was interesting because this was the largest ship I have ever made a wheel for since coming up here, and yet the wheel they wanted was the smallest I have ever made, only 2 feet diameter, because she steered with some sort of fancy autopilot system and the wheel was just an emergency wheel.  Since then I have made only one smaller bronze wheel for a beautiful USN 1904 vintage steam cutter being restored in New Orleans.  Only the handles are wooden on that one; and the bronze rim was a very tricky casting.

I made your wheel about 1989 or thereabouts and I don't recall the customer's name.  I remember he was some sort of marine lawyer and hung it on his office wall, which was sad for me as I like to see my wheels actually on a boat.  So it is a great pleasure to see my best steering wheel on such a neat old tug as Dominion.  My friend Capt. Keith Sternberg, who is a well known NW marine historian and ex-tugboat owner and captain, told me about it being on board.  He has ridden the Dominion in the past with a previous owner, a fellow named Floyd I think.

I actually worked for some years, when work in the shop and foundry was slow, as a tug captain myself in the Gulf IntraCoastal Canal.  I briefly owned a big 85 foot tug, the ex-USN YN-47, with a 400 hp Atlas Imperial engine.  A lot of engine!  As you may know, a 400 Atlas engine weighs around 48 tons.  This tug had a neat history and was at Pearl Harbor during the attack.  You can see her down at the bottom of the lists online of the US naval vessels at or near Pearl on that day.  I wrote off for her war record and the vessel got a commendation for bravery when she came alongside the battleship Oklahoma at Pearl as it was capsizing, to take men off.  She was driven ashore in Galveston Bay and destroyed in Hurricane Christy (or Cindy? - I forget now) some years after I resold her.  I went over to see the wreck being cut up and traded several six-packs of cold beer for her builders' plaque which I still have.  It was over a hundred degrees that day and the poor guys were glad to see that cold beer!

I still own a smaller tug, Buster, which I built myself in 1992 and brought up here when we moved.  She has a smaller 60 hp Atlas Imperial (only weighs a mere 3-1/2 tons, a tiny Atlas engine!).  I never renewed my old license since it was no good up here in this region anyway.  There are a couple of photos of Buster on my website; see the link in my previous note to Karen below. (Here http://www.rockisland.com/~marshall/index.html)

Well, a long winded email, but I thought you might enjoy some background on me and my ships wheels.  I have some photos I will dig out and scan in.  And I will try to get away for a break soon and come over to meet you and see the Dominion.